Multi-instrumentalist Angie Swan from Milwaukee, Wisconsin attended the Berklee School of Music and shared the stage with artists such as Will.i.am, Nicole Scherzinger, Fifth Harmony, and CeeLo Green. She is also known for her touring work for the Cirque du Soleil production of Amaluna and her recent tour with David Byrne where all three string instruments relied on the Kemper Profiler.

What is your general approach to getting your guitar sound?
I’ve always felt the sound should come from your hands: the tone, vibrato, and dynamics. For a long time, the clean channel of a Fender Twin Reverb has been my first choice and I combined it with chorus, wah, overdrive for a boost, distortion, and delay. Five basic sounds. With David Byrne (American Utopia), it was all different. We were sent Profiler units and told to listen to the music and find sounds in there that would work for us. Well, since I like different sounding amps, it was a real cool thing. So I worked my way through all 21 songs, taking notes on which tones I would need for the parts, such as clean, as little more fuzzy, a little chorus. It took a few days but was really worth the effort. My typical sound comes from a Twin Reverb profile and I would switch to a Dual Rectifier profile for a few high-gain sounds. Meanwhile, I purchased my own Profiler with the Profiler Remote and will hopefully soon put my own amps in it (Supro 1622-RT). For David Byrne’s tour, I relied on the sounds that were in the unit and they worked perfectly. However, I have always preferred my own sound. When I started playing guitar, I didn’t have any pedals besides a wah and a distortion. While others in music school had cool multi-effect boards, I imitated delays with my hand and used the reverb on the amp. I still like that approach. I don’t want to think too much about my feet. I am not a tap dancer, I’m a guitar player! Of course, I had more pedals and a switching system later, but I always like to keep the focus on the sound. The Profiler makes this easy once it’s dialed in and your sounds saved. I can now apply my original methods but with new technology.

Does David also use a Profiler?
Yes and so does the bass player, Bobby Wooten Jr. I believe, they matched David’s sounds to the old Talking Heads tones. He loves that single-coil Fender tone, so he uses a Stratocaster for the show. The guitars I use are mainly from Knaggs (Severn guitar made by Joe Knaggs) and I also use a Novo guitar. I was trying to get the sound of guitarist Adrian Belew, referencing his working on the Talking Heads album “Remain In Light”. Usually, I am a humbucker girl, but here I used P45 pickups made by Lollar. It’s a thick single-coil sound that combines the brightness of a single coil with the fullness of a humbucker. Plus, there was another Knaggs I used called a Kenai, with humbuckers for the heavier-sounding songs.

What was the stage situation like?
It is all clean. There are no amps or pedals, not even a drum set. The whole stage is a dancefloor. David, Bobby, and I share an RJM Mastermind GT switching system. Our technician Patrick Lachmann handles all the switching, but it is mainly my tone that changes. He is pretty much my feet and makes sure to match the tempo and switch exactly in time. The Mastermind GT controls all three Profilers plus a fourth spare unit. Every musician has a color code and the buttons will switch from intro to verse to chorus to solo etc. In addition, there is a song where I needed a wah part without having a pedal on stage. So we found a perfect auto-wah sound in the Profiler which really worked to get that funky attack. Generally, I was really satisfied with the results. And now, for the next round, I will dive deeper in my own unit and will start programming it and use it in the studio. Visually, the show was minimalistic almost theater-like, and the complete opposite to a rock band. However, the technique was pretty advanced. We didn’t need to carry lots of amplifiers and cabinets, but we still had four trucks in total. We had four battery packs on us, equipped like the Ghostbusters: Wireless systems for the instruments and for singing, plus antennas on our shoulders. Because everywhere we walked, a remote-controlled spotlight called Black Tracks would follow us. There is an aspect of having the rock band aesthetic. However, when you think about it, this approach is more flexible and will give the musician more mobility. When people go to shows, they usually say they went to “see” and band, not “hear” a band. The audience listens as much with their eyes as it listens with their ears. So we, the band, have to bring the stage to life by moving our bodies!

In which way did that differ from your work with Cirque du Soleil?
All the musicians would wear costumes and make-up and walk in the audience while playing. By that time, 2012-2015, I used a G-System with a Palmer cabinet simulation. I chose a sound and went out in the audience with one setting because MIDI or timecode switching was no option in a situation where circus artists are involved and could miss a flip, forcing the band to go back and repeat four bars. So every show could end up being a little different, 300 times each year. With David Byrne and the Profiler I can now have multiple settings and, thanks to Patrick, use my feet for dancing!

What’s your studio choice so far?
It’s a Supro 1622-RT tube amp. Loud enough but not big like a Twin Reverb which is simply too heavy for me as a person. It’s clean but breaks up a little. The clean tone is really nice. In a studio, I would probably also record in a room, just to have a choice. This is where the new Kemper Kabinet might come in real handy because it will give you more variety. My Supro for example has a 10” speaker and I would like to try its sound with a 2×12”. Recording direct is really practical, but it is also great to have a real cabinet if you have the chance to play loud in a studio. Let’s see when it is ready. However, I have also recorded tracks with the Profiler which people loved. So I am going to take that route more often. It is less of a problem with the neighbors. There’s no sound of the speakers and it sounds really good, even with a nice set of headphones.

Is there a difference in feeling, what about latency?
Well, when I played with Cirque du Soleil, David Byrne, and CeeLo Green, we were always using in-ear-monitors. So there wasn’t really a difference to a real amp. Also, we didn’t have any latency issues.

With David’s show, how many basic sounds do you need?
The Twin Reverb is my foundation and I would build on top of it by changing the mid-range, turning down the low end to get that single-coil sound, or adding effects. I would use the Dual Rectifier profile for the heavier sounds. I don’t use any external pedals, but the auto-wah, a little chorus sometimes, and a lot of flange ­ all from the Profiler. For my rare solo spots, I use a boosted version of the Twin Reverb and maybe add a little delay while David’s setting has a lot more effects to reach his alien kind of horse sound. To make the sounds bigger when needed I sometimes turn up the gain. One important task for the show was to balance all profiles in gain structure before running the signals to the FOH who would also add a few nuances such as reverb or delays. Our FOH engineer, Pete Keppler, agreed that the sounds from the Profiler were great. In any case, I was extremely carefully doing level changes during the show. The band consists of 12 members and it would influence each one’s monitor mix, even though there is never too much guitar (laughs). Pete is already busy mixing all these moving musicians: There are six drummers in the style of a marching band, and at any second a snare or a cymbal can be near my vocal mic. So I try to get him a ready sound. Personally, I like my monitor-mix to sound like the recording with myself sticking out just slightly.

Do you adjust the profiles to your specific guitars?
Because of the pickups, the guitars are chosen very specifically for the songs. And I’ll have a backup. Taking “just another” guitar would cause sound issues. Gladly, I rarely break strings. With Cirque du Soleil I broke two strings in three years and two on tour with David.

Did you use an acoustic guitar?
David did use one for “Burning Down the House” and it sounded great through the Profiler. I didn’t use one, but there was one song where I used an acoustic setting in the Profiler because there was no time to switch guitars in that song. So we found a sound that was good enough to be used as an acoustic replacement.

Is there anything you miss with the Profiler?
I am working my way through the unit and didn’t play enough through a real speaker to really judge that. So far, live and with in-ears, the results were great and really close to the actual amps. To avoid a dry sound we always use an audience mic which brings down the feeling of isolation and gives back the feedback of the audience. But yeah, there is one thing: I was never really a fan of auto-wahs because there is too little interaction. So I am waiting for a better combination of manual and automatic techniques. A dynamic-wah that reacts to the attack of your hand.

What about your solo work?
I had started my solo work around 2012 but had to lay it aside because of the job with Cirque du Soleil. I finally returned to Milwaukee in 2015. And since the album is not ready, there now is a chance to use the Profiler for it. I don’t have to pay to rent different amps to get all these different kinds of tones. I can do a lot at home now and collaborate with other musicians by exchanging files. I would prefer to sit in a room with a band, but it’s difficult with everybody’s schedules and also where I live. So I sing, play guitar, bass and keyboards, but not the drums. But I have a couple of great drummer friends I can always call. I like to bring different influences, that’s why it takes so long. I am now trying to get a first single out with two 5 song EPs to follow within the next year.

How would you describe your music?
There is humor, politics, and talk about life in it. You may call it poetry. After my first solo live show, someone approached me and described my music as “David Bowie meets the Beatles and Prince covered in chocolate”. It’s groovy, funky with rock elements and comedy. Hopefully, I’ll be on the road with my own stuff in 2020 ­ with a band of course.

Thank you so much for taking the time to answer our questions. Angie’s website can be found at: www.angieswan.com 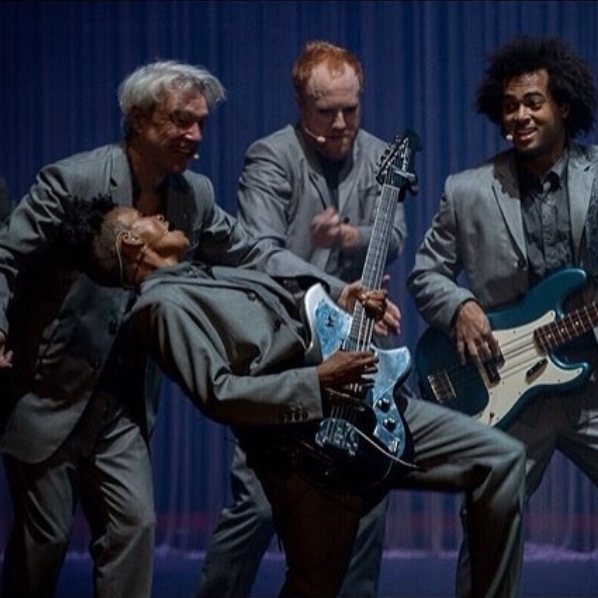